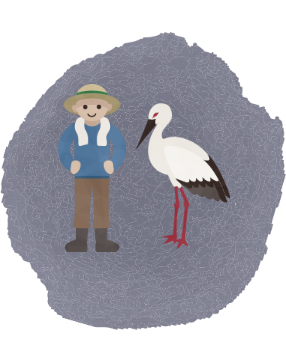 A Farming Method That Nurtures Storks 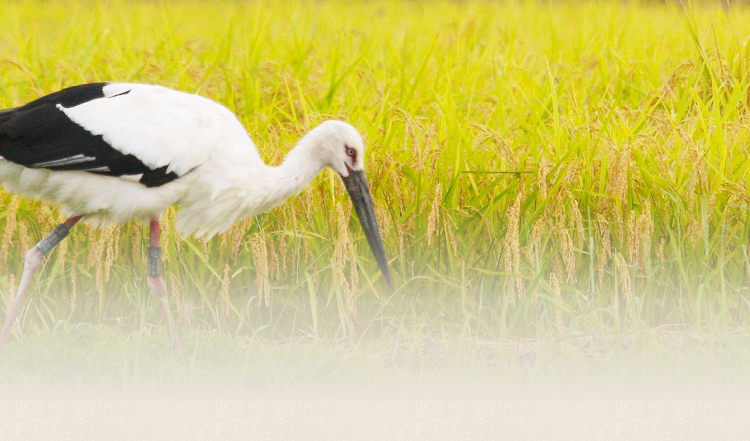 “Kounotori,” well-known as birds that bring happiness, are storks in Japanese. Today, they are an endangered species, with only around 2,000 birds left worldwide, in regions including far-eastern Russia, China, South Korea, and Japan. Storks resemble cranes and herons, and can grow up to 1m in height with a wing-span of 2m. Adult birds weigh between 4 and 5 kg. Storks have mainly white plumage with black flight feathers and black beaks. Their main sources of food include crucian carps, loaches, frogs, snakes, and locusts, which live in rivers or paddy fields. 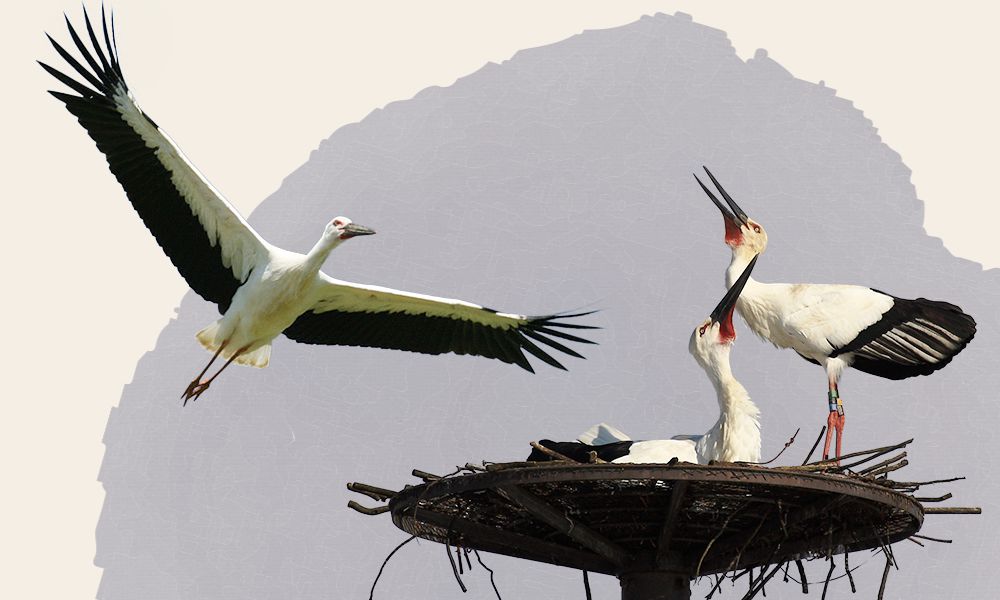 What Does Tajima Have to Do with Storks?

Japanese storks became extinct in 1971. Their last known habitat was Toyooka City, which lies in the center of the Tajima region in northern Hyogo Prefecture. The people of Toyooka, wishing fervently to see the storks fly in their skies again, began a series of initiatives to return these storks to nature, centering on efforts to preserve the natural habitats of these storks. Now, 50 years since that time, over 100 storks have successfully been returned to the wild and can once again be seen flying gracefully over Tajima as they used to. 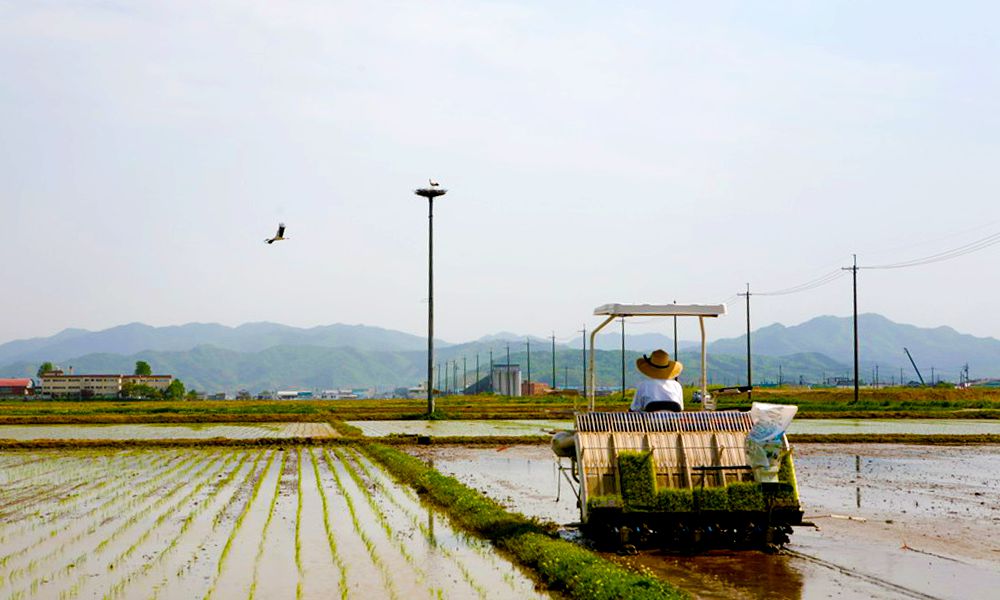 Until around the Meiji era (1868–1912), the Japanese archipelago was home to a large number of storks, but as a result of overhunting from the Meiji through early Showa eras (1926–1989), the population of storks declined dramatically. In the postwar period, the use of pesticides and chemical fertilizers, the reformation of wet paddy fields into well-drained paddy fields, the building of concrete river embankments, and other factors caused the disappearance of many creatures that were sources of food for storks. What is more, there was an accumulation of organic mercury in the remaining prey, which resulted in the death of some of the storks that ate them. And then in 1971, the last Japanese stork died in Toyooka City, causing the extinction of storks from Japan.

A Promise Made to the Storks

Stork preservation activities began in Toyooka City in 1955. However, the establishment of artificial nesting towers and efforts to preserve the environment did not produce results. In 1965, artificial breeding began, but it also didn’t lead to success. As the people of Toyooka put wild storks in cages at that time, they made a promise to the storks, “Someday, we will return you to the vast skies where you belong.” Forty years later, in 2005, five storks were freed into the skies of Toyooka. We plan to keep up our efforts to keep the promise made to the storks.

12.5m-tall artificial nesting towers are built to give the storks a place to build nests and raise their young in safety. We also created wetlands and biotopes that can act as hunting grounds for the storks even during the dry season when there is no water in the paddy fields. 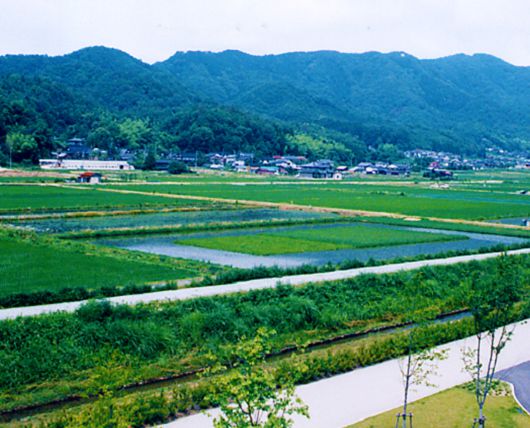 Rice fields that are abandoned due to the lack of successors are repurposed into hunting grounds for storks. Local residents, NPOs, universities, and other organizations are working together to restore the natural habitat of storks in the area. Organic farming without the use of pesticides or chemical fertilizers is spreading among the region’s rice and vegetable producers in an effort to promote the coexistence of man and nature. Based on a specific set of standards, JA Tajima has been working to popularize farming methods that can help nurture storks. 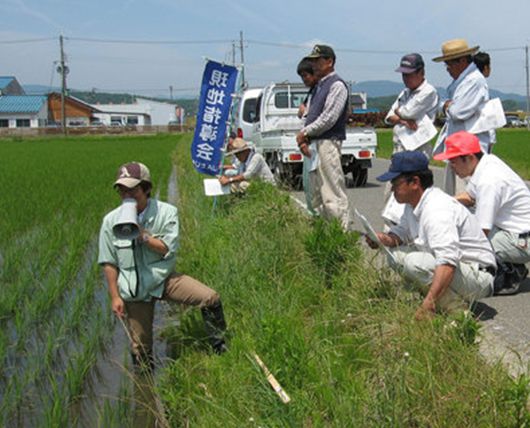 Toward Releasing Storks Back into the Wild

In 1985, fourteen years after storks became extinct in Japan, the Russian city of Khabarovsk sent six baby storks to Toyooka, and artificial breeding began. Starting with the birth of the first chick in 1989, new chicks were born each year, and by 2002, there were over 100 artificially bred storks. Then finally in 2005, five of these birds were released into the skies of Toyooka in the first step to return them to the wild. It had been 50 years since the start of preservation activities and 20 years since the start of artificial breeding. 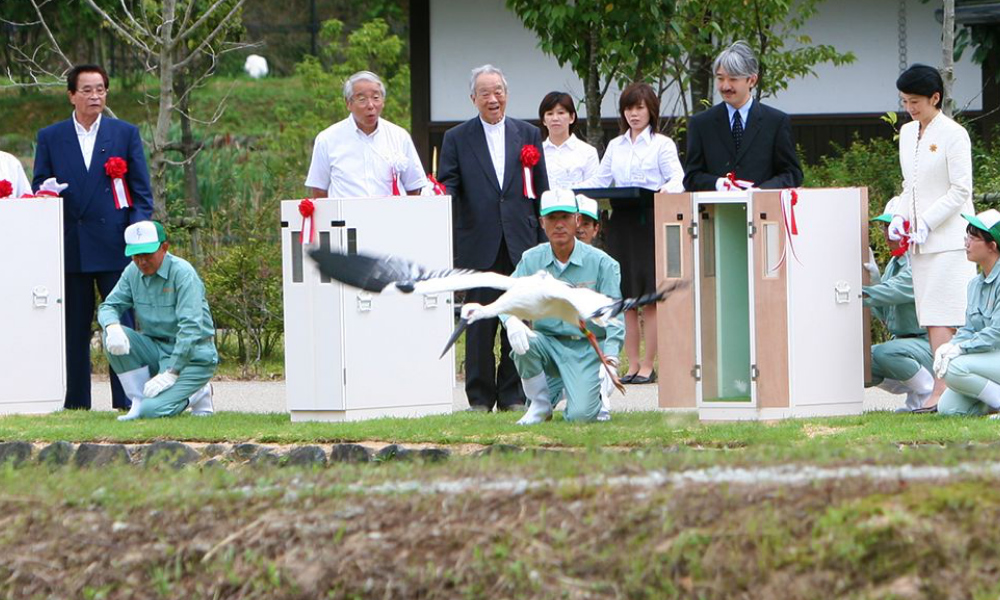 Initiatives to Coexist with Storks

More than ten years since the experimental release of the birds in 2005, over 100 wild storks can be seen flying in the skies of Tajima and a similar number of storks are artificially bred, and their numbers are steadily rising. In order for storks to become a part of the natural ecosystem all over Japan, we must create an environment conducive to biodiversity and increase the number of people and regions supporting such efforts. Toward this, JA Tajima will promote an ecosystem building style of agriculture, in which safe crops are cultivated while having a low impact on the environment. 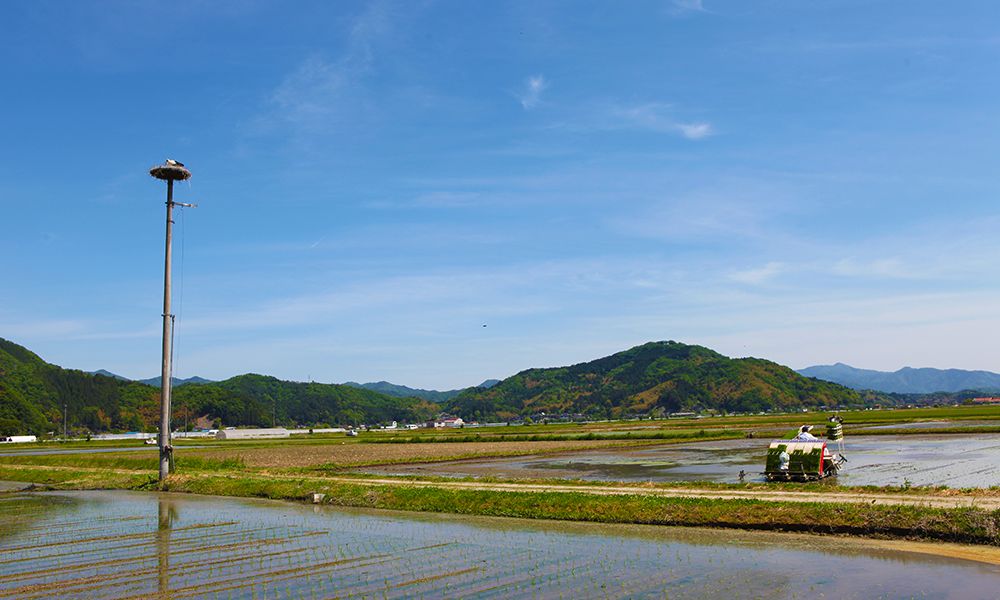 In order to produce delicious rice while giving shape to the fervent wish to release storks back into the sky, Tajima’s producers actively engage in what is called the “stork-raising farming method.” The stork-loving producers of Tajima are practicing an ideal form of agriculture through which people can coexist with nature.

What is the “Stork-Raising Farming Method”?

The stork-raising farming method is one that aims to create a rich culture, region, and environment in which delicious rice can be produced while also protecting and nurturing a diverse variety of living organisms so that storks may also live there. For instance, in order to nurture an environment in which living beings can flourish, paddy fields are flooded in the winter (winter flooding), organic fertilizer is used right from the seedling stage, pesticides are either eliminated altogether or used in smaller amounts (and only those that are not toxic to fish) to practice safe cultivation of crops. Tajima will be the wealthier for protecting storks by allowing creatures that are food sources for storks to thrive. 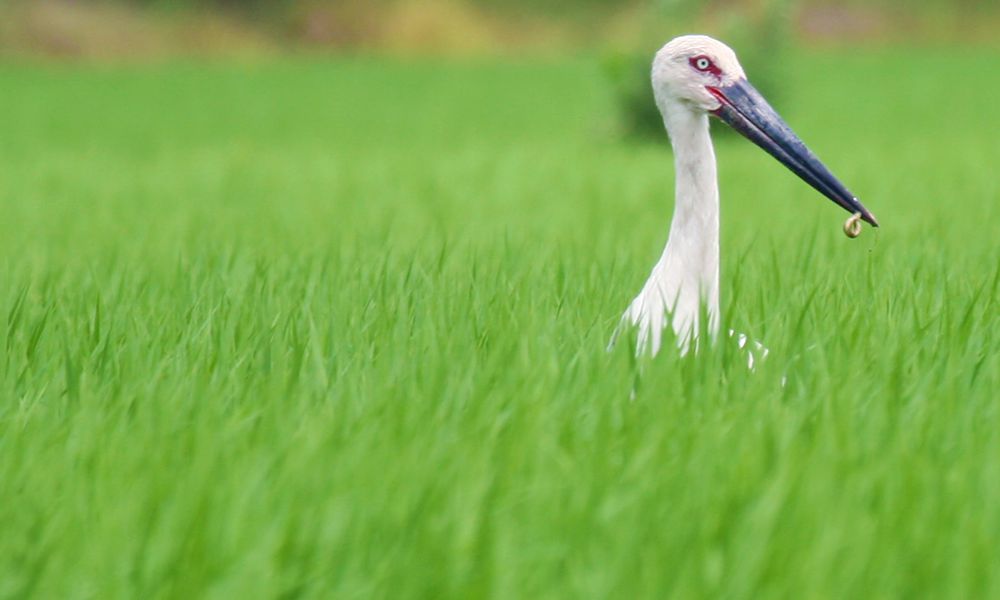 One Year of the Stork-Raising Farming Method Water striders and tadpoles give birth in the paddy fields in spring. To help them flourish, the fields are flooded early, as much as a month ahead of rice transplantation (flooding-in-advance method). As spring turns to summer, Japanese rice fish, loaches, dragonfly larvae and other organisms begin to thrive. Rice is transplanted once the temperature of water in the fields increases to 20℃, sometime around 20 May or later. For 40 or so days starting then, the fields are flooded with a deeper level of water (deep-water farm management). These are ways of rice cultivation that allow living organisms to thrive. 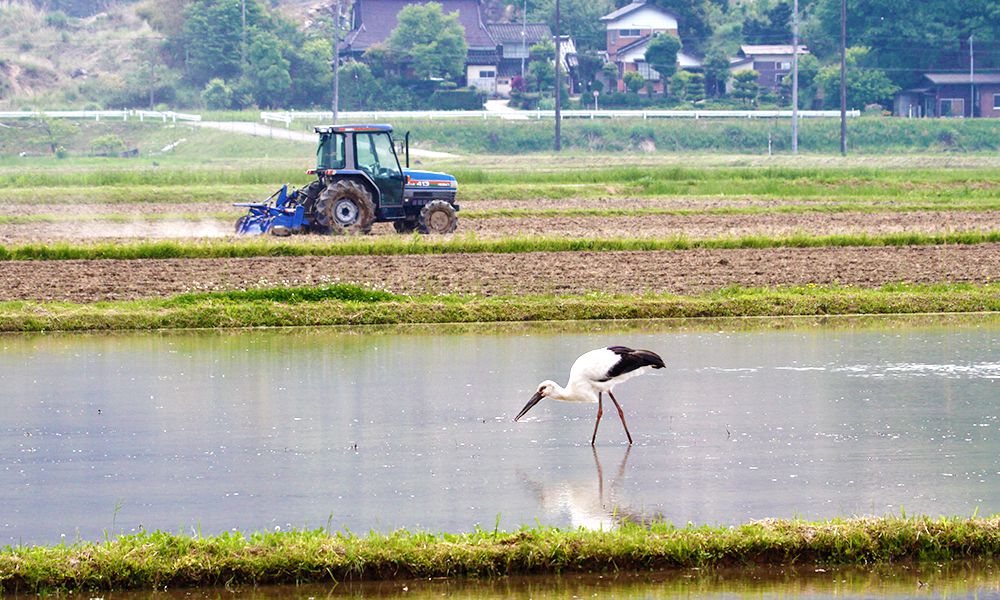 In the summer, once tadpoles have turned into frogs and dragonfly larvae have turned into dragonflies, the water level in the fields is lowered for what is called “mid-summer drainage.” After that, the fields are watered just enough for the paddy to grow, and starting two weeks before harvest, the water level is allowed to drop off naturally. Fall is the season of harvest, and during this season, the fully-grown frogs, spiders, and mantises feed on stink bugs, weevils, and other insects that could destroy the crop. The crop ripens well, assisted by these living creatures, and is harvested when ready. 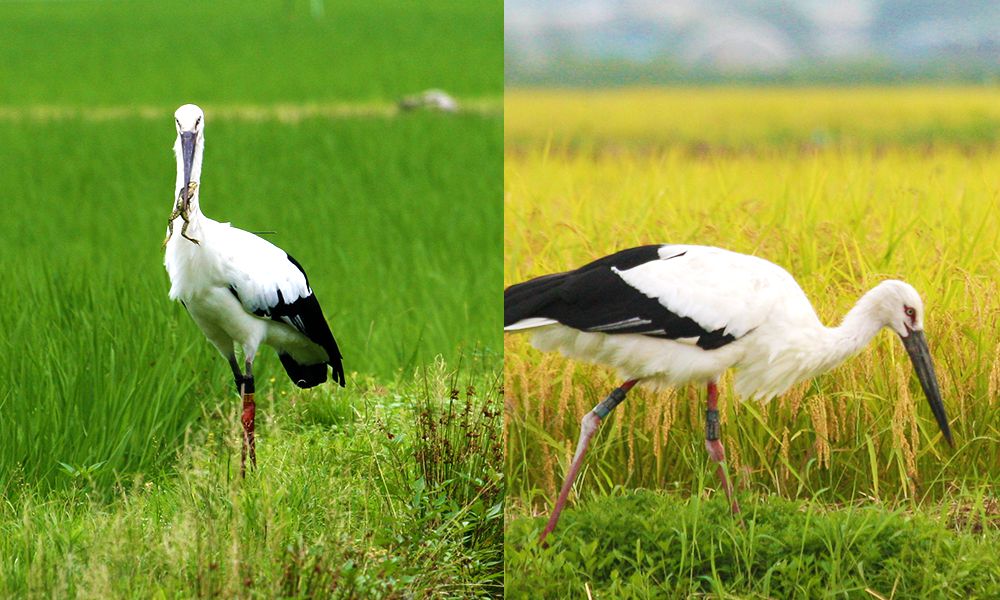 As part of the stork-raising farming method, fields are flooded with water even during winter. Furrows are created to prevent the water from draining away and organic matter is scattered in the soil to feed the microorganisms living in it. When winter arrives in Tajima, the fields are flooded with enough water to submerge the straw remaining in the fields. This is called “winter flooding method” and allows microorganisms to flourish in the fields during winter, making the soil very fertile. Also, because many creatures can live where there is water, they become a good source of food for the storks during winter too. 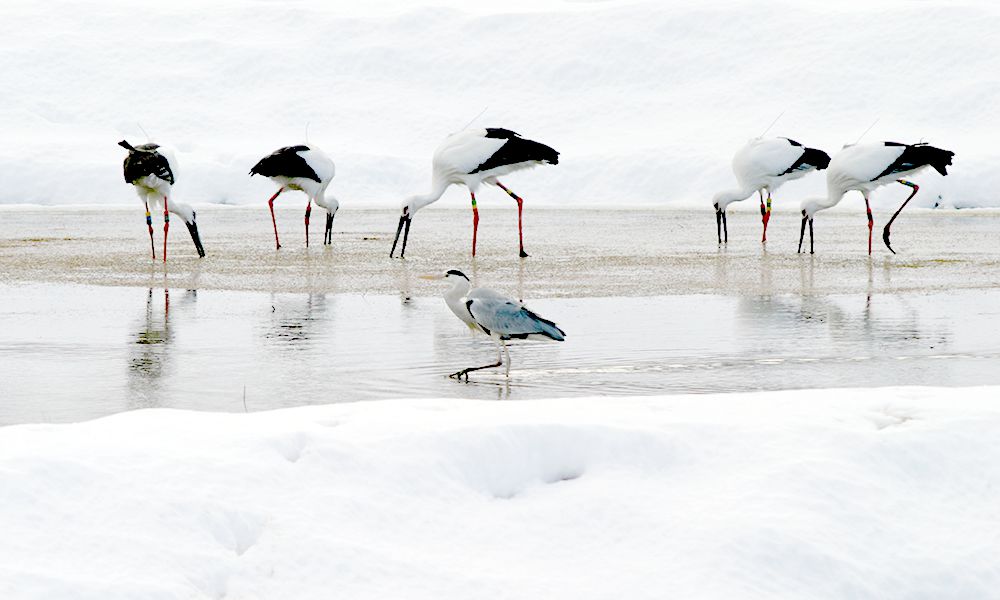 When you buy Kouno Tori Natural Rice, a portion of the proceeds is contributed to the Stork Protection and Rearing Fund.

What is Kouno Tori Natural Rice

Kouno Tori Natural Rice is rice cultivated by the stork-raising farming method, which helps return storks to the wild. The delicious rice cultivated in Tajima is Kouno Tori Natural Rice. Rice grown and harvested in fields that have been kept as natural as possible is safe and healthy, soft and fluffy when cooked, and delicious even when eaten cold. 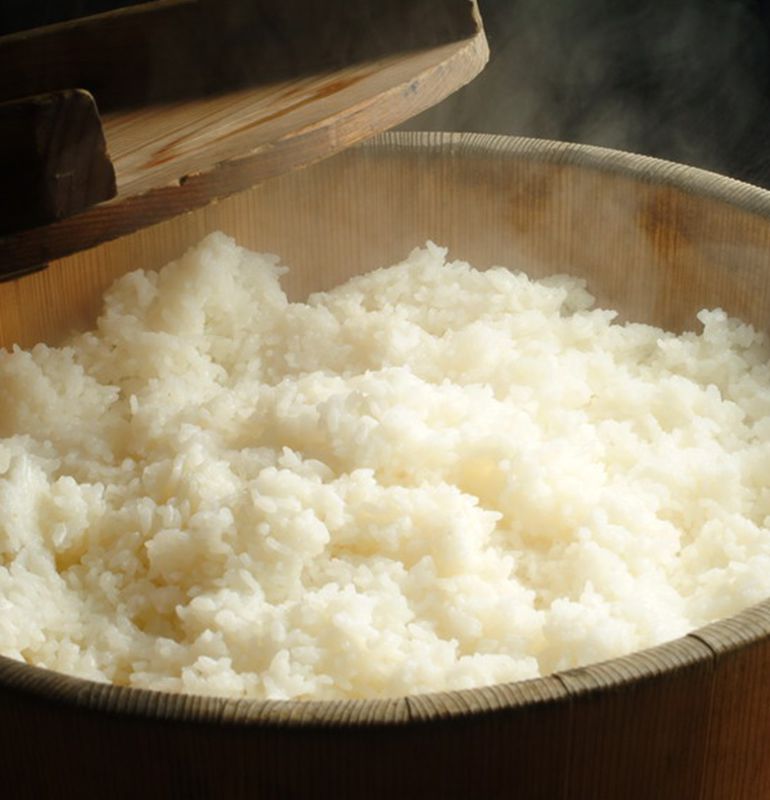 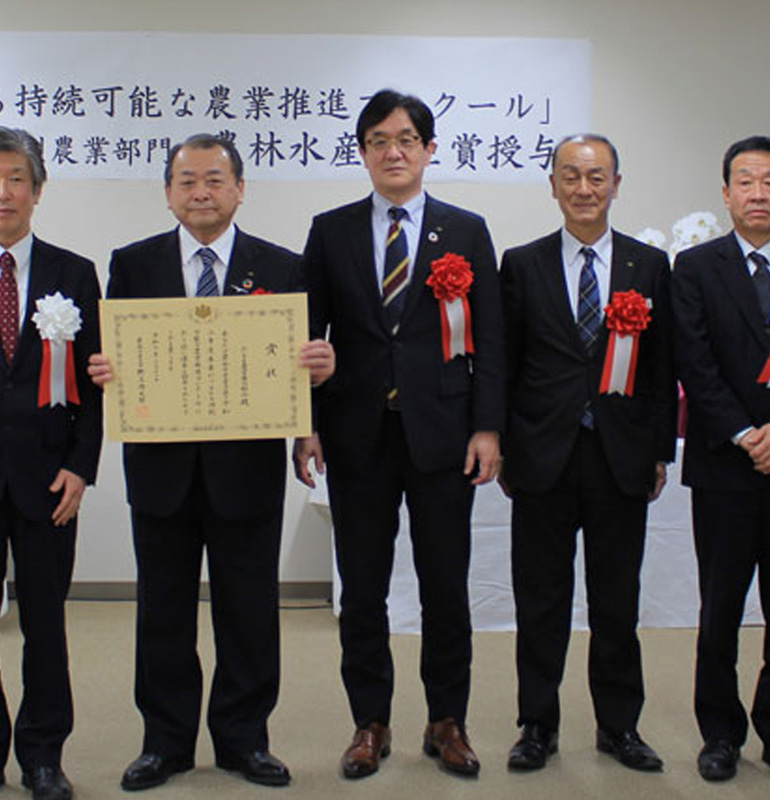